In a fairytale world, you would be able to build React Native applications without having to know anything about the native mobile development, However the reality is far from that. During my time working with React Native, in so many occasions, I faced bugs that I struggled to fix, mainly because I knew nothing about IOS, nor Android.

Driven by shame 😅 and curiosity, I decided to to dig a little bit in native mobile development, and combine it with things I have learned during my time working with React Native, to write this article, and save you some pain learning all this by yourself.

The content of this article may seem like a basic knowledge for someone coming for a mobile background, however most people learning and working with React Native are coming from a frontend background.

In the first part of our sequel, we will focus on Android, more precisely understanding concepts and files that you will interact with as React Native developer.

I hope you're ready for your first walk of atonement .

The first Android mobile was publicly released with Android 1.0 in 2008, today Android goes from version 1 to 13 , We tend to have one major version per year, and each of these (except 1.0) has a Codename. Codenames are inspired by tasty treats, for example Android Pie aka Android 10.

As a developer, you will rarely need to know about Android versions, except in some rare cases where knowing the Android version a phone is operating on, will help you conclude which Api level it is using, but what is an API level you may ask?

Api number is consecutive integer that express the current version of the api. It is a number that we are going to interact with several time during the development of our app.

Minimum SDK version : defines instability, it indicates the minimum api number that we are going to support. In a simple way, your application will only work in phones with equal or greater api level.

Android Studio has a way to help you pick the best minimum sdk . In order to to that, Open Android studio and create a new project, you will see the window below. 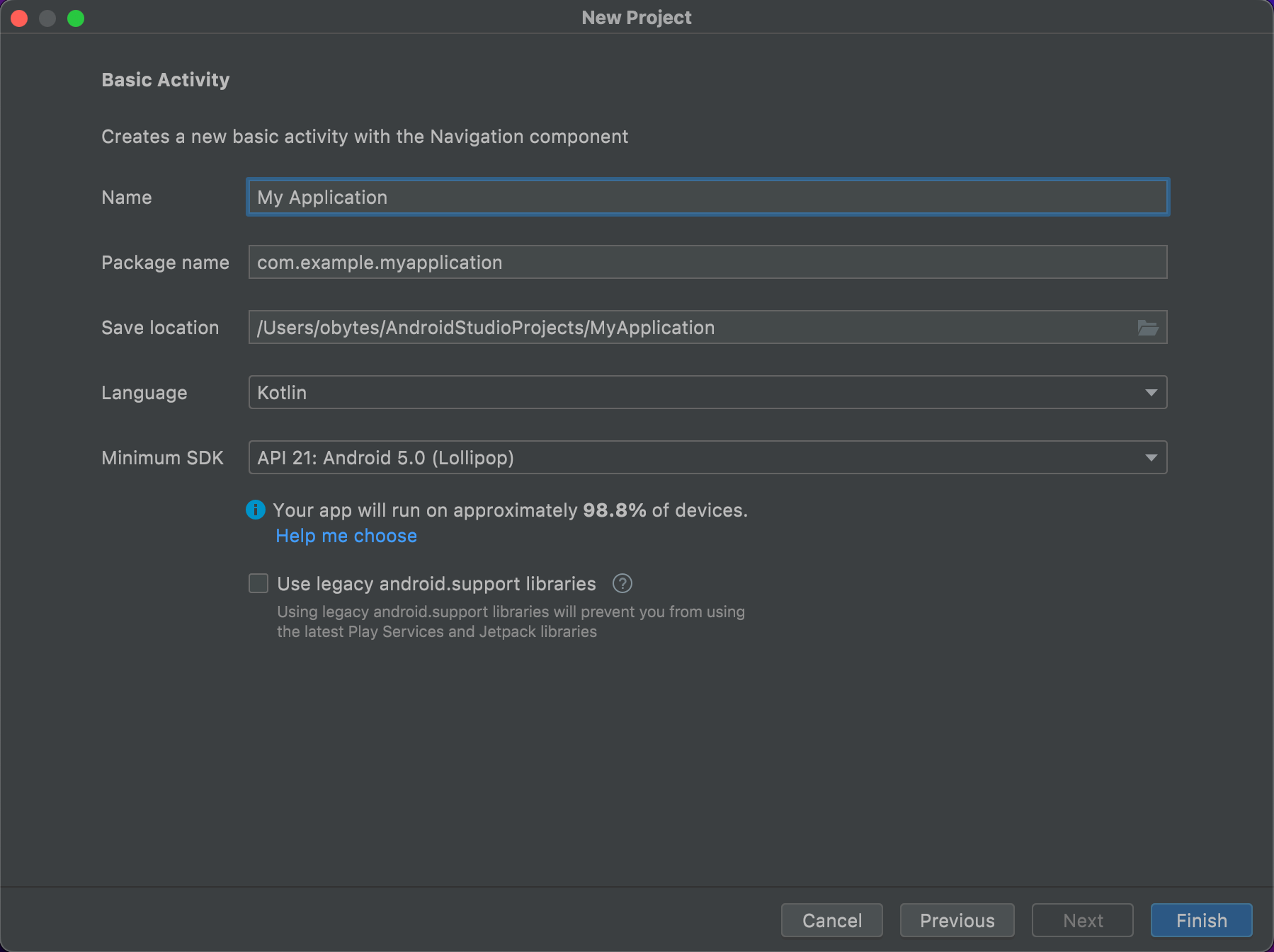 Click on help me choose, and you'll see a diagram that represents each api level in addition to the percentage of users you're going to cover. 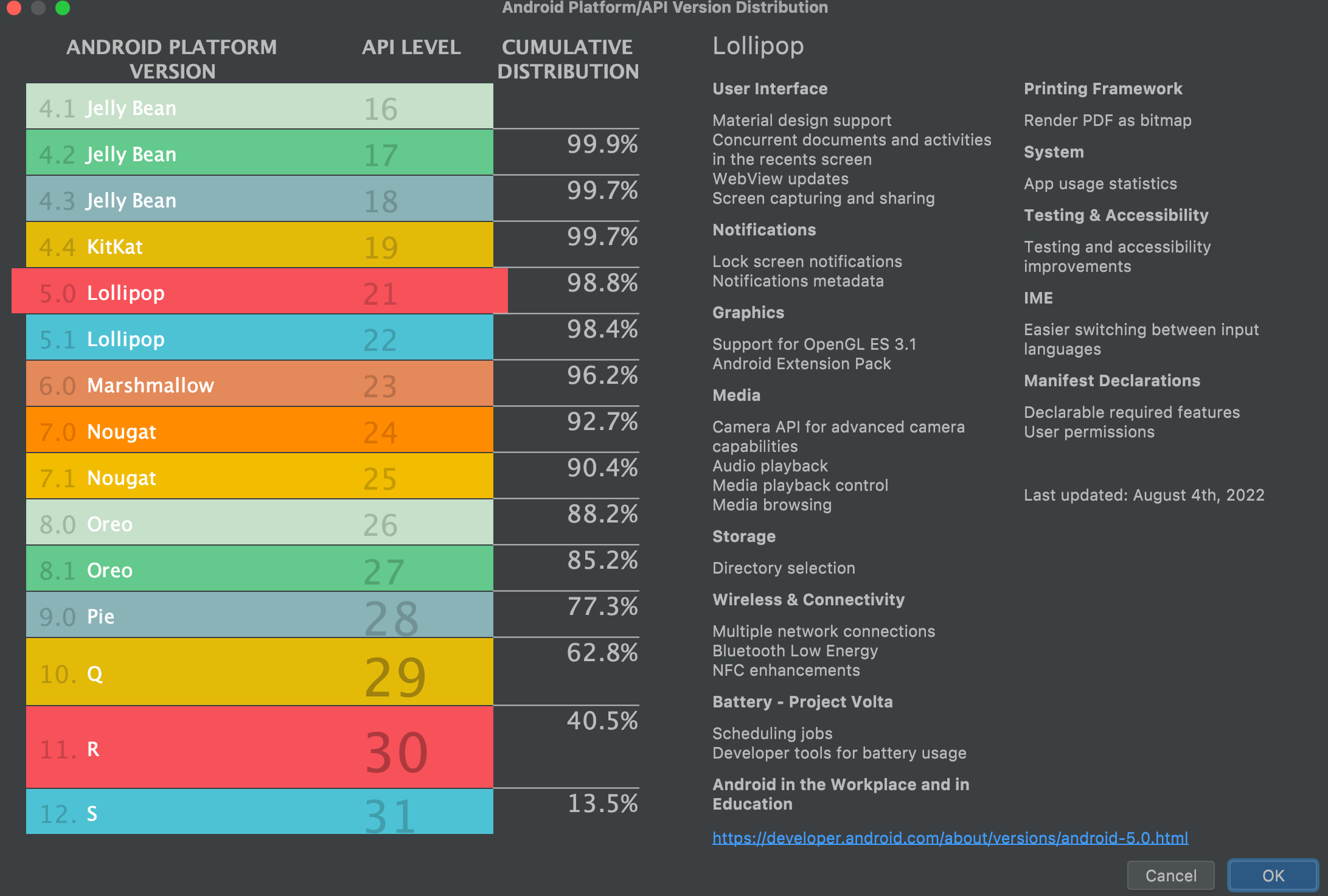 Depending on your business, and how many users you would like to reach, you choose the right sdk level.

Target SDK version : the version of the sdk that we tested our app on. This number tells the Android operating system that our application was working fine in this version, so the OS will act accordingly to make sure our app is working fine in versions that may come up in the future.

Compile SDK : This is not shipped with the app; rather, it is a compiler that we are using. The more modern the compiler, the more efficient and superior the output. And we usually use the most recent version.

Now that you know what is an sdk number, you might be wondering where can I change my sdk values?

If you opened android/build.gradle in a React Native project, you will see something like:

Every Android project requires a Gradle to generate an apk from the project's.java and.xml files. Simply put, a gradle takes all of the source files (java and XML) and applies appropriate tools, such as converting the java files into dex files and compressing them all into a single file called apk that is actually used.

android/gradle.build is a top-level build file where you can add configuration options common to all modules.

You can see the different values that we talked to about earlier, like minSdkVersion and targetSdkVersion, and you can change them directly from there.

You can see also see some additional values like:

build Tools Version, the version of the compilers that you want to use.

Ndk Version, The Android Native Development kit is a tool set that lets you implement parts of your app in native code, using languages such as C and C++.

These are the most popular repositories, and you will usually find most of your required dependencies in them. Actually, during my time with React Native, I only had to change this part of build.gradle one time, when we needed to use a dependency that resides in the JCenter repository.

For the rest of the file, I never had to change any of these values, but if you need more information about Gradle, and how to configure it, you can visit the docs.

The manifest is an xml file that describes essential informations about your app to the Android build tools, the Android operating system, and Google Play.

the manifest does the following things:

I have never came a cross a project where I didn't need to interact with this file, therefore it would help you to know the main element of a manifest file and their purposes, which are:

<manifest> The manifest is the main component of the AndroidManifest.xml file. The package field describes the package name of the activity class. It must include an xmlns:android and package attribute-specified application> element.

<application> A manifest can contain only one application node. It uses attributes to specify the metadata for your application (including its title, icon, and theme).

<activity> Declares an activity (an Activity subclass) that implements part of the application's visual user interface. All activities must be represented by <activity> elements in the manifest file. Any that are not declared there will not be seen by the system and will never be run.

<uses-permission> It is contained within the <manifest> element and describes a system permission that the user must grant for the app to function properly.

<intent-filter> An Intent is a messaging object you can use to request an action from another app component. By adding <intent-filter> to your activity, you what an activity can do.

I invite you to check intents-filters docs to understand more the subject.

If you need more details about each and every element of the manifest file, you can reach out to this guide

You probably heard of Android package, and Android bundle, if you're not sure what is the difference, I got you.

An Android package, which is an archive file with an .apk suffix, contains the contents of an Android app that are required at runtime and it is the file that Android-powered devices use to install the app.

to generate an APK you run

An Android App Bundle, which is an archive file with an .aab suffix, contains the contents of an Android app project including some additional metadata that is not required at runtime. An AAB is a publishing format and is not installable on Android devices, it defers APK generation and signing to a later stage.

When distributing your app through Google Play for example, Google Play's servers generate optimized APKs that contain only the resources and code that are required by a particular device that is requesting installation of the app.

to generate an ABB you run

Now that you know the difference between these formats and how to generate them, you may be wondering how can you publish your android app in Play Store, I will not be covering it in this article, since my colleague Youssouf Elazizi wrote a really detailed article about how to publish apps using Github Actions, I highly recommend you follow his tutorial.

Congratulations, you have confessed your Android sins, and walked your first walk of shame, don't forget to keep an eye on our blog for the next part of this sequel, which will cover your IOS sins.